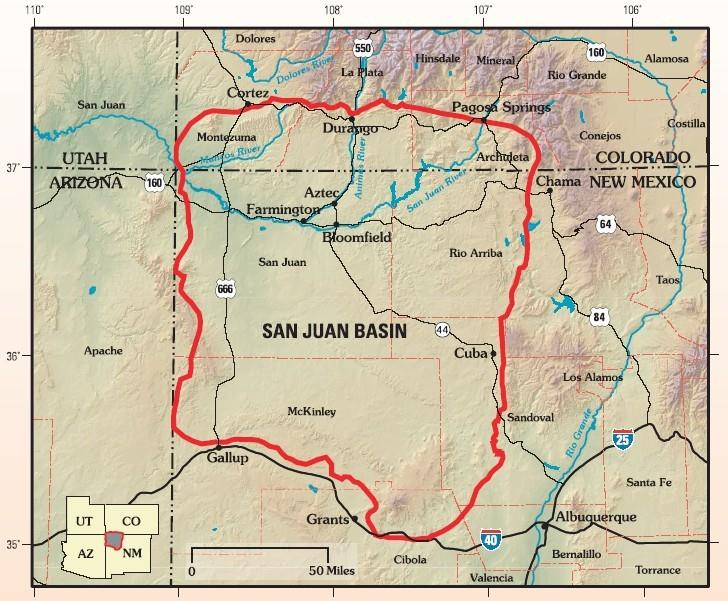 Join us for a San Juan Basin luncheon in Farmington, NM.  Jack Rosenthal, VP of Geoscience at DJR Energy, will present on workflows for developing a hydrocarbons-in-place model for the Mancos oil rim in the San Juan Basin.  Guillermo DeHerrera, Director of the Jicarilla Oil and Gas Administration, will lecture about oil and gas potential on the Jicarilla Apache Nation, and gas export options in the San Juan Basin.  PLUS a poster session by Paul Spear (former ConocoPhillips and Logos Resources) and Sabina Kraushaar (Juniper Resources).

Please RSVP by Tuesday, Nov 12th at noon.  Cost is $20/person with RSVP by deadline. $25/person post
deadline and/or at the door while food lasts. $2/person talk only. The first four students to register from FLC OR SJC can attend for free as long as they make the deadline.

Bio: Jack has more than 10 years of experience in upstream oil and gas operations. He successfully developed the geological foundation for major acquisitions in the Denver-Julesburg basin as a leading member of the DJ Resources team. Mr. Rosenthal now serves as Vice President of Geoscience directing and participating in exploration, delineation and acquisition programs throughout the Rockies. These in depth evaluation projects have both delineated numerous development targets and driven recent acquisitions in the San Juan Basin.

Abstract: “DJR Energy has integrated experience from other Rockies Basins with a detailed geologic evaluation of the Gallup sands to identify limits of economic development in the San Juan Basin. Using a petrophysical model tailored to local formations and mineralogy allows DJR to understand complex trends in oil and gas distribution within a stacked sandstone sequence. A wide variety of data sources have influenced this method for estimating original oil-in-place and future productivity. The distribution of hydrocarbons across the southern flank of the San Juan Basin is complex, but volumes ranging from 8 to 30+ Million Barrels in place per section provide fantastic horizontal development opportunities for years to come. Lessons will still be learned about the deliverability of mapped hydrocarbons, drivers of GOR and how recovery factors will impact inter-well spacing among others. DJR Energy has not hesitated to apply similar techniques to look beyond the Gallup for economic opportunities in the San Juan Basin oil rim. Continuing to tie a detailed understanding of geology with data from new wells will lead industry towards more profitable development in the San Juan Basin.”

Bio: Mr. DeHerrera is a native of Colorado, having been born and raised on a ranch in Conejos County. He worked in the State Attorney General’s office after graduation from CU, Boulder, then became a Colorado licensed attorney in 1985. He has served as a Representative in the State Legislature  and as a
Commissioner of Adams County. His background in law was put to use in business contracting in Colorado, Indiana, California and Mexico. For nine years he worked on contracts for building projects in Iraq, including oil pipelines. He has spent ten years in the oil and gas industry, working for Chevron, Gulf Oil Corporation and the Pittsburgh & Midway Coal Mining Co. For the last four years he has worked for the Jicarilla Apache Nation. Mr. DeHerrera is married to Rosemary Y. DeHerrera, who is also an attorney. They have three children.

Talking Points: Mr. DeHerrera’s talk will cover the following points: Potential development of oil and gas resources in the Jicarilla Apache Nation compared with other basins in the US and in Iraq. Global supply and demand for San Juan Basin gas is causing “stranded gas”. LNG export to Asia is a potential market for natural gas from the San Juan Basin. Other potential opportunities include sending gas to electric power plants (GTPP) in the region.